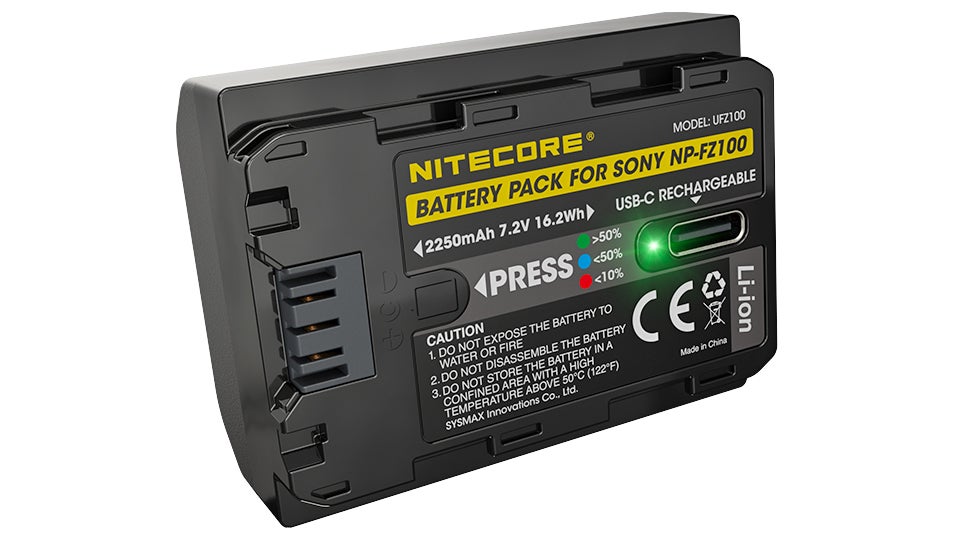 There’s lots of good reasons to consider third-party alternatives when replacing or augmenting the rechargeable battery that came with your digital camera. The most obvious is price, as it’s often much cheaper to ditch the name brand when replacing a dead battery. But Nitecore has introduced another reason to kick Sony’s own camera batteries to the curb: a built-in USB-C charging port.
Although most digital cameras will charge the inserted battery when connected to a power source, photographers usually rely on multiple batteries to get them through the day, which also means they’re usually carrying around a proprietary charger so multiple batteries can be topped off as needed. As we all know, proprietary chargers are annoying at best, and can cause headaches when one goes missing.

A better solution is what Nitecore is offering, with its new UFZ100 rechargeable battery designed to replace Sony’s FP-Z100 battery which is used in everything from the Sony a7 III, to the a9 series, to even the recently announced 4K FX3 compact cinema camera. Although the Nitecore UFZ100's 2,250 mAh capacity is actually slightly less than the 2,280 mAh capacity of the comparable Sony NP-FZ100, it can be easily charged using a USB-C cable connected to almost any power source-from the USB port of the laptop you’re editing photos on, to a multi-port wall wart that can be shared with the rest of your devices in need of a charge.

Hover-1 Highlander Pro Foldable Electric Scooter
Joyride Around Town
The Hover-1 Highlander Pro Foldable Electric Scooter reaches speeds up to 15 MPH, goes 18 miles in a single charge, features a foldable design, and comes with a disc and foot brake for safety as well as a bright LED display and headlight.
We’re also awarding bonus points to Nitecore for not only the inclusion of an onboard charge status LED, but one that offers three colors during a battery test so it’s easier to understand your battery’s remaining charge level: red if it’s below 10%, blue if it’s below 50% (but over 10%), and green if it’s over 50%. During a charge, this LED also blinks red until it turns solid green, indicating the battery’s completely topped off.
What remains to be seen is whether or not the Nitecore UFZ100, with its added functionality, will still be a cheaper alternative to official Sony-branded batteries, as the company hasn’t revealed specific pricing or availability details just yet. We’ve reached out to Nitecore for more details and will update this post when they are available.