Can You design a Hollow Metal Sphere So gigantic That It Floats?

Can You Make a Hollow Metal Sphere So Big That It Floats? 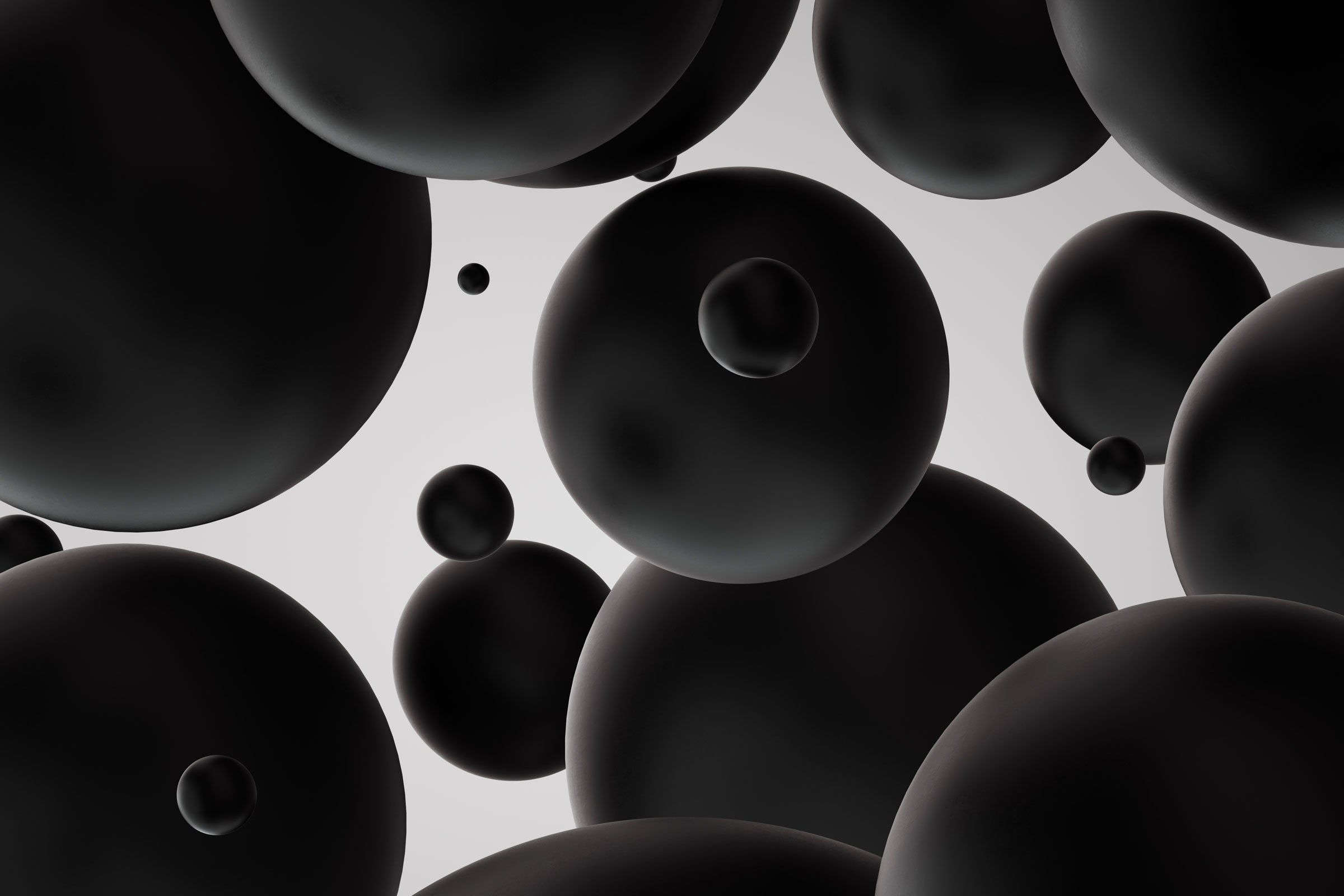 Let's be clear: You shouldn't try to take over the world. However, if you are going to do it anyway, Ryan North's new book How to Take Over the World does have some interesting ideas about how to gain supervillain power. If you’re going the villain route, you’re definitely going to need your own base. While the book contains several ideas, I was most intrigued by the prospect of a giant floating metal sphere.
You might have noticed that metal doesn't float in air, at least not normally. But what if you built something like a balloon with a metal shell instead of one made of rubber? It might not be totally practical, but could that work? Yes. Yes it could.
Let's start with something simple: a party balloon filled with helium. Let’s imagine the string is balanced with some weight so that it floats perfectly. It doesn't rise and it doesn't fall-it just hovers there waiting for the guests to admire it. But what makes it stay there? The answer is a combination of the gravitational force and the air around it.
Imagine you could look at the air very closely and see it for what it really is-a bunch of molecules, mostly nitrogen and some oxygen. These molecules are like balls moving around in all directions. When something gets in their way, like a wall or the rubber of a balloon, they collide with it and bounce back. Since the molecule changes motion during this bounce, there must be a force from the wall pushing on the molecule. (Forces are always an interaction between two objects, which in this case are the molecule and the wall.) Since the wall pushes on the molecule, it must push back on the wall with an equal but opposite force. 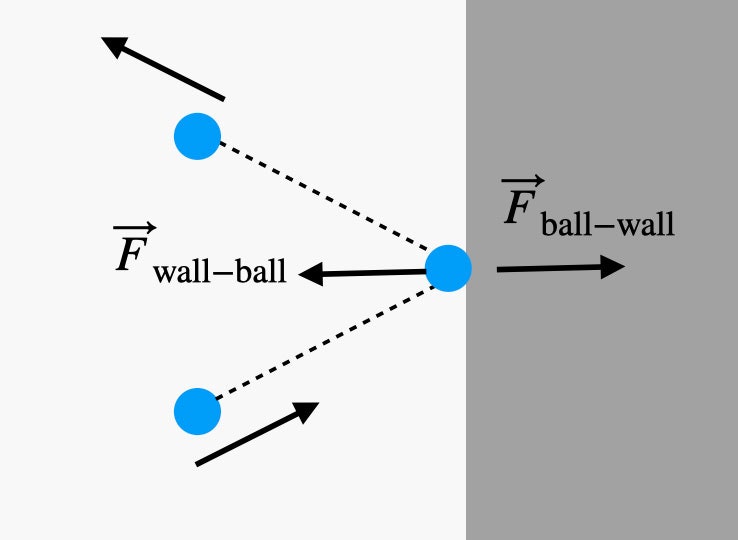 Of course, that's just one collision. There will actually be many of these collisions with the wall (since there are a lot of air molecules). The total force exerted on the wall from the air depends on the number of collisions-and the number of collisions depends on the size of the wall. A bigger wall will clearly have more collisions.
So, instead of talking about the total force on the wall, it's a bit easier to look at the force (F) per unit area (A). We call this the pressure (P). In this case it would be the air pressure. 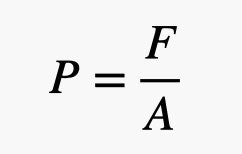 But wait! The pressure also depends on the molecules’ mass, their speed, and how many molecules are in the gas (which is its density). We don't really need to worry too much about the air molecules’ mass unless we change the gas. (If your plan to take over the world includes changing the atmosphere from nitrogen-oxygen to something else, it's probably not a super great plan.) And their speed is directly related to the air temperature, so you can speed them up by heating the air.
The density of the air is the most important factor. Suppose your balloon has a diameter of 10 centimeters, which seems like a fun party size. The density of air at the top of the balloon is lower than the density at the bottom, which creates a pressure difference. Near sea level, atmospheric pressure is about 105 newtons/meter2 (14.7 psi). So moving from the bottom of the balloon to the top will produce a pressure change of 1.176 N/m2.
Let's use this change in pressure to calculate some forces. I'm going to do something a little weird-I'm going to use a cube-shaped balloon. (If that freaks you out, I understand.) However, this will be a much simpler calculation, and the same thing works with a spherical balloon that has dimensions L x L x L.
Here is the balloon: 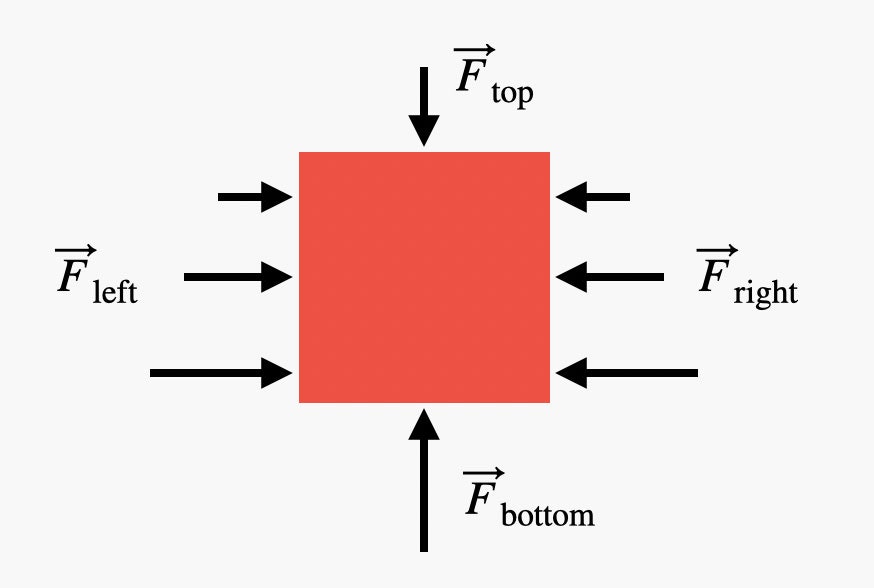 (I'm only showing the forces due to the pressure from the air.)
Let's start with the four vertical faces of the cube-balloon. Since these are vertical, the pressure at the bottom is different than the pressure at the top. It's possible, but not trivial, to calculate the total force on these faces-luckily we don't have to. Looking at the forces on the left side of the balloon, we can see that they are exactly opposite to the forces on the right side of the balloon. When these left-right forces are added together, they cancel. The same thing would happen for the other two vertical faces of the cube (the front and back). So, we don't have to worry about them.
What about the bottom of the balloon? This surface is at a constant height (since it's a horizontal surface), so it's easy to calculate the force due to the atmospheric pressure. We just need the area of A, which is L2. That gives an upward-pushing force of:

I can do the exact same thing for the top of the balloon-but this force is pushing down and the pressure on the top is slightly less. This gives the following net force in the vertical direction:

In this expression, a is the density of the air at the bottom of the balloon (approximately 1.2 kilograms per meter3), and g is the gravitational field (9.8 newtons per kilogram). For the cube balloon, the change in the height (y) is equal to L.
Putting this all together, we get:

Yes, I replaced the L3 with V-the volume of the cube. We get an upward-pushing force on this cube due to the change in pressure of the air. Since this uses the density of air and the volume of air displaced, we can say that the net upward force from the air is equal to the weight of the air displaced. We often call this a buoyancy force. (But, remember it's due to the air-that's why I like Fair.)
This works for any shaped object where V is the volume. Notice that this total force from the air only depends on collisions between the air molecules and the surface. It doesn't matter what the balloon is made of or what it's filled with. Only the volume matters.
Then why does a party balloon float but a basketball of about the same size falls? It has to do with whether the upward-pushing buoyancy force is enough to overcome the gravitational force that is pulling the object downwards.
Let's put in some numbers. Let's assume both a basketball and a balloon have a diameter of 20 cm. Calculating the volume and plugging into the Fair equation, I get an upward-pushing force of 0.049 newtons. That's tiny.
But the rubber shell of a balloon is thin, so the gravitational force is not very large. And if you fill it with helium, a gas that has a lower density than air, you can compensate for the mass of the balloon’s thin surface and achieve equilibrium. If you can get the mass of the rubber plus the helium gas to be the same as the upward-pushing buoyancy force, the balloon floats.
It doesn’t matter what you put in the basketball; it will still fall. The rubber shell of the basketball is much thicker and heavier than the wall of the balloon. The tiny buoyancy force is essentially insignificant compared to gravity’s pull on an object with this mass, and it can’t overcome it. So the ball drops.
Now, let’s work on your supervillain lair. Ryan North claims that if you make a hollow metal sphere big enough, you can turn it into a secret floating base to use while you try to take over the world. Or maybe you just want to hang out there, I don't know.
Is that actually possible?
Let's make a spherical object and see if it floats. Remember that for the object to float, its weight must be equal to the weight of the air displaced. For this object, it's going to have two parts-the outer shell and the interior gas. The interior gas will have a radius of R and density ~1~. The shell has a thickness of t with a density of 2.
The first (and simple) thing to calculate is the buoyancy force. This just depends on the volume of the whole sphere, which has a radius of R + t. But if we are going to get this super villain base, it will only work with a thin shell. That means we can just say the radius of the whole thing is the same as the radius of the interior (R).

I used a little trick here. For the volume of the shell, I assumed that it was thin. This means that the volume can be estimated as the surface area of the balloon multiplied by the thickness. (There is a better formula for the volume of a shell, but it gets a little messy.)
If I make the weight of the whole sphere equal to the upward force from the air, we get a floating base, but notice that I didn’t specify the value of R. We can vary the total radius, the type of interior gas, the thickness of the shell and the density of the shell.
Suppose I want to build a floating sphere that is made from aluminum with a thickness of 5 cm (with a density of 2.7 grams per centimeter^3) and fill it with a gas that's just slightly less dense than air-like 1.0 instead of 1.2 kg/m3.
(You could also do this with air itself, just by decreasing the amount of air in the sphere. You could still breathe inside it, but it would be harder, the way it is when you’re standing in the thin air on top of a mountain.)
To figure out how big it would need to be to float, I created a short Python program.
This content can also be viewed on the site it originates from.
It comes out to a diameter of over 4 kilometers, or 2.5 miles. That's a seriously large base. It would be really difficult to keep something like that a secret, but it would indeed be cool.
You can try to make this thing smaller with some changes. First, let’s reduce the density of the gas inside to 0.8 kg/m^3 and use a shell that's just 3 cm thick. In that case, you get a sphere with a diameter of 1.2 km (0.75 miles). That's a little better.
These calculations assume the density of air decreases linearly with altitude. But when you get really high, the air gets super thin-its density nearly hits zero when you reach outer space.
So could building your lair right at the edge of Earth’s atmosphere allow you to create a floating sphere of a more manageable size? I’m afraid not. Since the air on the top of the sphere pushes down and the air on the bottom pushes up, the buoyancy force really depends on how the density changes and not the actual value of the density. At super high altitudes, the density can’t go below zero, so the change in density can’t be as great. This means that you couldn’t make your supervillain base on the edge of space. You need to be a lower-altitude villain.
But it’s entirely possible to get your base to float around the level of clouds, which manage to float despite being made of water. Clouds will make your headquarters harder to spot, especially if you camouflage your base to look like one of them.
So, in the end, this floating base would be possible, but perhaps not very practical. That’s OK. Hopefully it will always be difficult to take over the world.