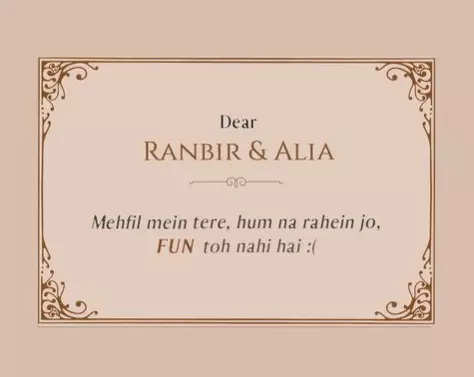 Ranbir Kapoor and Alia Bhatt tied the knot on April 14 in an intimate ceremony hosted at the Bandra residence. The couple’s families and close friends were in attendance for this two-day affair. Speaking about the rituals, Alia’s half-brother Rahul Bhatt told Bombay Times, “The Pandit ji was very particular about the rituals. And then there were the senior members of Kapoors and Bhatts telling Pandit ji aise karna hai or waise karna hai. After all film family hai na… like my dad he suddenly became a film director there as if he is directing a film. But Pandit ji was hell bent. So only four pheras happened and the Pandit ji explained the tatpariya also. I was listening to it carefully… one phera was around dharam, one around santaan, one for karam and so on.”


Announcing her wedding on Instagram, Alia Bhatt had shared eight pictures, as a tribute to Ranbir’s lucky number 8. “Today, surrounded by our family and friends, at home … in our favourite spot – the balcony we’ve spent the last 5 years of our relationship – we got married. With so much already behind us, we can’t wait to build more memories together … memories that are full of love, laughter, comfortable silences, movie nights, silly fights, wine delights and Chinese bites. Thank you for all the love and light during this very momentous time in our lives. It has made this moment all the more special,” Alia had penned. Neetu Kapoor had confirmed that Ranbir and Alia will not host a reception.