Fans query ‘Are you ok?’ after Priyanka Chopra shares a photo of her bruised face from the sets of ‘Citadel’

Fans ask ‘Are you ok?’ after Priyanka Chopra shares a photo of her bruised face from the sets of ‘Citadel’ – Times of India

Priyanka Chopra gave her fans a glimpse of her ‘tough day’ at work as she shared a picture of her bruised face from the sets of ‘Citadel’. Her worried fans ask the actress if she is fine.
Check out her post here: 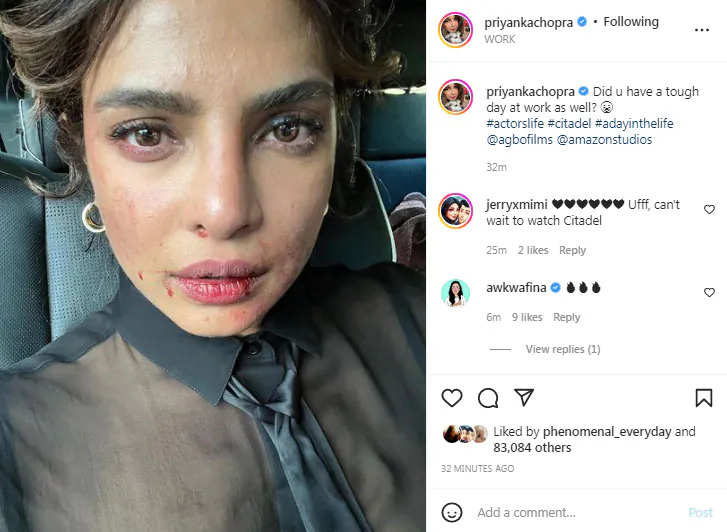 Dressed in a black outfit, Priyanka shows her bruised face in the selfie. Some blood marks can be seen under her nose and on her lips and chin. She captioned the picture, ‘Did you have a tough day at work as well? #actorslife #citadel #adayinthelife @agbofilms @amazonstudios.’


As soon as she shared the photo, comments started pouring in from all sides. While one concerned fan asked, ‘What happened are you ok’, another one added, ‘Take care of you …every day a new experience.’ Many fans also expressed their excitement over the upcoming series. ‘Citadel’ is a science fiction series which also stars Richard Madden.

Priyanka, who welcomed her first child ‘Malti Marie’ with her husband Nick Jonas earlier this year, recently resumed work. She had finished an earlier London schedule in December last year.

Apart from this, the actress will also be seen in a Bollywood movie titled, ‘Jee Le Zaraa’. To be directed by Farhan Akhtar, the film will also star Alia Bhatt and Katrina Kaif in lead roles.