Kareena Kapoor Khan and her kids Taimur and Jehangir are one of the most loved Bollywood celebrities we have on the block. However, the same cannot be said for Saif Ali Khan.
Recently, Kareena revealed why her husband does not like to pose for the paparazzi as much as his wife and children. The actress shared a profile on Saif that said that he does not like to pose for pictures as he is a powerful persona that also knows the tact of an understatement. Kareena joked that now everyone knows why Said doesn’t pose for the paparazzi. 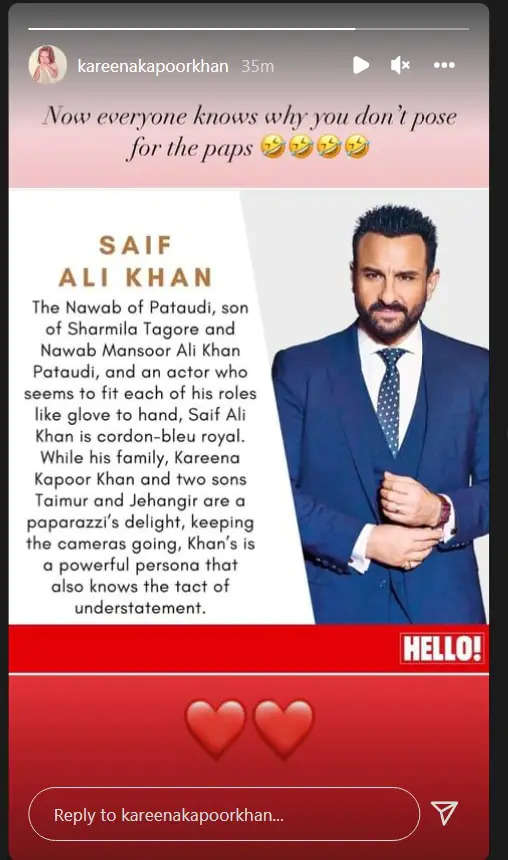 Saif’s profile from Hello! magazine read, “The Nawab of Pataudi, son of Sharmila Tagore and Nawab Mansoor Ali Khan Pataudi, and an actor who seems to fit each of his roles like a glove to hand, Saif Ali Khan is cordon-bleu royal. While his family, Kareena Kapoor Khan and two sons Taimur and Jehangir are a paparazzi’s delight, keeping the cameras going, Khan’s is a powerful persona that also knows the tact of an understatement.”


Meanwhile, on the work front, Saif has a line-up of some very interesting films in his pipeline. The actor will next be seen essaying the role of Raavan in Om Raut’s ‘Aadipurush’. The film will also star Prabhas, Kriti Sanon and Sunny Singh in lead roles.

Apart from this, Saif has also been roped in for ‘Vikram Vedha’ co-starring Hrithik Roshan in the lead role.