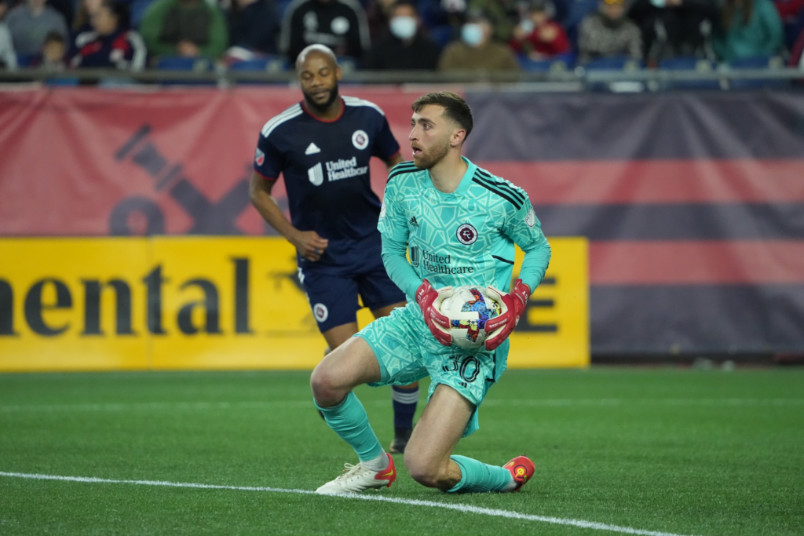 Week 9 of the 2022 Major League Soccer season started with Austin coming back to beat Houston 2-1 at BBVA Stadium. Carlos Ferreira put the Dynamo up in the 5th minute. Austin’s Daniel Pereira equalized in the 39th and Sebastian Driussi scored in the 66th.
FC Cincinnati beat Toronto 2-1 on the road at BMO Field. Ian Murphy scored for Cincinnati in the 44th with Luciano Acosta making it 2-0 in the 52nd. Jesus Jimenez pulled a goal back in the 65th minute.
Real Salt Lake shutout the LA Galaxy 1-0 at home. Marco Silva scored in the 49th minute and RSL goalkeeper Zac MacMath made four saves.
“Just felt like the game was slow, you know,” Galaxy coach Greg Vanney said. “I thought the guys had about 10 minutes between when we arrived at the stadium and when they had to go out to warm up because of a bus, that was delayed, nobody found it in their hearts to give us a few minutes to get our guys ready. So, we were into it pretty fast, and I felt like we were pretty slow in the first half with everything. It just felt like we never caught speed. A little better in the second half. But again, when you go slow, teams like this are going to put a lot of numbers behind the ball. You don’t have a lot of space.”
Montreal won 2-1 at home over Atlanta. Kamal Miller put Montreal up in the 4th with Marcelino Moreno equalizing for United in the 51st. Joaquin Torres scored for Montreal in the 82nd minute.
“I think there is some frustration, obviously, because of the result but also because I don’t think the performance of the team was one that deserved to lose the game,” Atlanta coach Gonzalo Pineda said. “I think that we certainly dominated the game, we certainly were in control of the game but we couldn’t finalize a good result due to the lack of the final product in both boxes. I think that we need to do better in the very limited times that the opposition is in our box. We need to do much better.”
Columbus shutout DC United 3-0 at home. Pedro Santos scored for the Crew in the 28th and Derrick Etienne doubled the lad in the 43rd. Darlington Nagbe finished off the scoring in the 75th minute. Columbus goalkeeper Eloy Room made three saves to keep the clean sheet.
Matt Turner kept the clean sheet for New England in their 2-0 home shutout of Inter Miami. The Revolution took the lead from a Damian Rivera goal in the opening minute. Playing a man up from a 60th minute Damion Lowe red card, Adam Buska scored for New England in the 64th. Inter’s Jairo Quinteros saw red in the 76th. Turner made three saves for the shutout.
“It felt pretty good,” Turner said of his first game this season. “I don’t think the coaching staff would have put me out there if they didn’t like what they saw in training the past – I’ll call it two weeks. So yeah, playing 90 is much different. You know, you’re on your feet for a while, you’re moving around. But no, I felt good out there. I was ready for the game. The first half did feel like it took forever, but overall happy with how I was feeling, how I performed, and how the team performed, more importantly.”
Orlando City beat Charlotte FC 2-1 at Exploria Stadium. Ruan put City up in the 16th with Facundo Torres doubling the lead a minute into first-half stoppage time. Christian Fuchs converted a 60th minute penalty for Charlotte.
The Red Bulls came back to beat Chicago 2-1 on the road in a game with a weather delay. With the Fire leading from a 16th minute Xherdan Shaqiri penalty, New York’s Patryk Klimala equalized in the 75th. Chicago’s John Durn saw red in the 80th and Rafael Czichos also exited early in the 83rd. Klimala converted a Red Bulls’ penalty a minute into stoppage time.
“I think anytime you play in a game with weather the way it was tonight, the pauses, heavy rain came down during that pause, the field started really well the first-half, but then the second half was really wet,” Chicago defender Jonathan Bornstein said. “It slowed it down a bit. It’s always a challenge to play in those, but I think both teams have to play on that field. It was kind of two different games, to be honest, the first half and the second-half.”
Sporting Kansas City drew 2-2 at home with FC Dallas. Johnny Russel converted a Sporting penalty in the 22nd. Dallas responded with goals from Alan Velasco (36th) and Jesusu Ferreira (42nd). Playing up a man from a 67th minute red card to Brandon Servania, Sporting’s Daniel Salloi equalized in the 77th.
Colorado shutout Portland 2-0 at home. Diego Rubio put the Rapids up in the 30th, seeing red in the 63rd. Mark-Anthony Kaye converted a Colorado penalty five minutes into stoppage time.
On Sunday, NYCFC shutout San Jose 3-0 at home. Keaton Parks put New York up in the 74th and Gabriel Pereira doubled the lead in the 78th. Chris Gloster finished off the scoring in the 88th with Sean Johnson making three saves to keep the clean sheet.
Nashville and Philadelphia drew 1-1 in the first game at GEODIS Park. The Union’s Mikkel Uhre scored the opening goal in the 66th with Nashville’s Randall Leal converting an 85th minute penalty.
Week 9 ends at Banc of California Stadium, where LAFC shutout Minnesota United 2-0. Ryan Hollingshead scored in the 82nd minute and Jose Cifuentes made it 2-0 in the 90th. LAFC goalkeeper Maxime Crepeau made one save to keep the clean sheet.
Photo by David Silverman – ISIPhotos.com