If you ventured into the theater to watch Doctor Strange in the Multiverse of Madness this weekend, you probably got to see the first teaser for Avatar: The Way of Water, the long-awaited sequel to the 2009 science-fiction blockbuster Avatar. Director James Cameron has spent more than a decade making the first of a planned four sequels, a large fraction of which takes place in underwater environments.
(Spoilers for the 2009 film below.)
Cameron wrote a treatment for Avatar way back in 1994, and it was supposed to be the director’s next big project after he wrapped his blockbuster Titanic. But Cameron realized the technology did not yet exist to make the film he envisioned. He spent several years working to develop what he needed, including a cutting-edge virtual camera system to direct the motion-capture scenes. (He compared it to “a big, powerful game engine.”)
The visionary gamble paid off. The finished film set new box office records upon its release; it was the highest-grossing film until Avengers: Endgame briefly took the top spot in 2019. (A March 2021 Chinese re-release put Avatar back on top.) Critics were mostly positive, praising the technological achievements, although some pointed out that the storytelling suffered slightly. Cameron also consulted with multiple scientists while designing the world of Pandora (a moon orbiting a gas giant exoplanet called Polyphemus in the Alpha Centauri A system). Avatar was nominated for nine Oscars, ultimately winning for Best Art Direction, Best Cinematography, and Best Visual Effects. 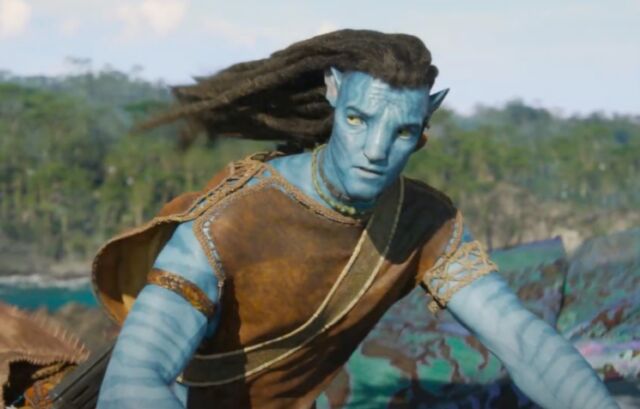 Even before Avatar‘s release, Cameron expressed his hope of making two sequels, widening the story’s scope to include other moons of Polyphemus. The first would feature Pandora’s ocean and involve shooting footage at the bottom of the Mariana Trench with a deepwater submersible. (Cameron made the first solo descent to the trench in 2012 thanks to one such submersible.) But once again, he needed technology that didn’t exist yet-namely, for filming motion capture scenes underwater. As Cameron explained to Collider in 2017:
It’s never been done before and it’s very tricky because our motion capture system, like most motion capture systems, is what they call optical base, meaning that it uses markers that are photographed with hundreds of cameras. The problem with water is not the underwater part, but the interface between the air and the water, which forms a moving mirror. That moving mirror reflects all the dots and markers, and it creates a bunch of false markers. It’s a little bit like a fighter plane dumping a bunch of chaff to confuse the radar system of a missile. It creates thousands of false targets, so we’ve had to figure out how to get around that problem, which we did. Basically, whenever you add water to any problem, it just gets 10 times harder. So, we’ve thrown a lot of horsepower, innovation, imagination and new technology at the problem, and it’s taken us about a year and a half now to work out how we’re going to do it.
I expect we’ll hear more about the various technological advances achieved to make this film as the studio marketing ramps up. 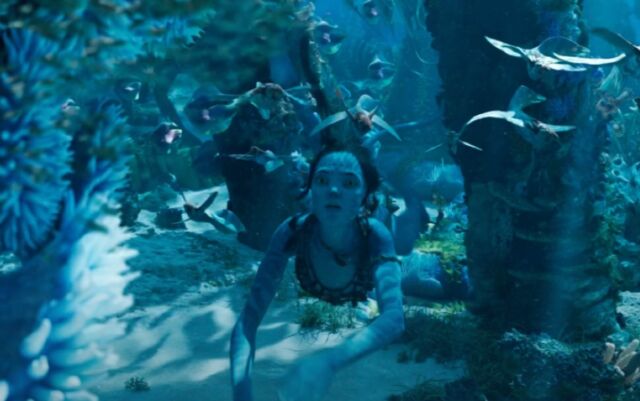 Sam Worthington and Zoe Saldana are reprising their roles as Jake Sully and Neytiri, respectively. Jake decided to meld with his avatar permanently at the end of the first film, so he could be with Neytiri and start a family on Pandora. Per the official synopsis: “Set more than a decade after the events of the first film, Avatar: The Way of Water begins to tell the story of the Sully family (Jake, Neytiri, and their kids), the trouble that follows them, the lengths they go to keep each other safe, the battles they fight to stay alive, and the tragedies they endure.”
That’s pretty vague but consistent with what we’ve heard over the years. Jamie Flatters, Britain Dalton, and Trinity Bliss play the pair’s three children (Neteyam, Lo-ak, and Tuk), while Jack Champion plays a teen named Spider born on the human base, who is rescued and adopted by the couple. Sigourney Weaver (Dr. Grace Augustine), Stephen Lang (Colonel Miles Quaritch), and Matt Gerald (Corporal Lyle Wainfleet) will also be returning, despite all three having died in the original. And CCH Pounder returns as Mo’at, Neytiri’s mother and the Omaticaya clan’s spiritual leader. Cameron has said that Quaritch will once again be the primary antagonist. The return of that old threat forces Jake and his family to leave their home and explore other parts of Pandora-hence “the way of water.”