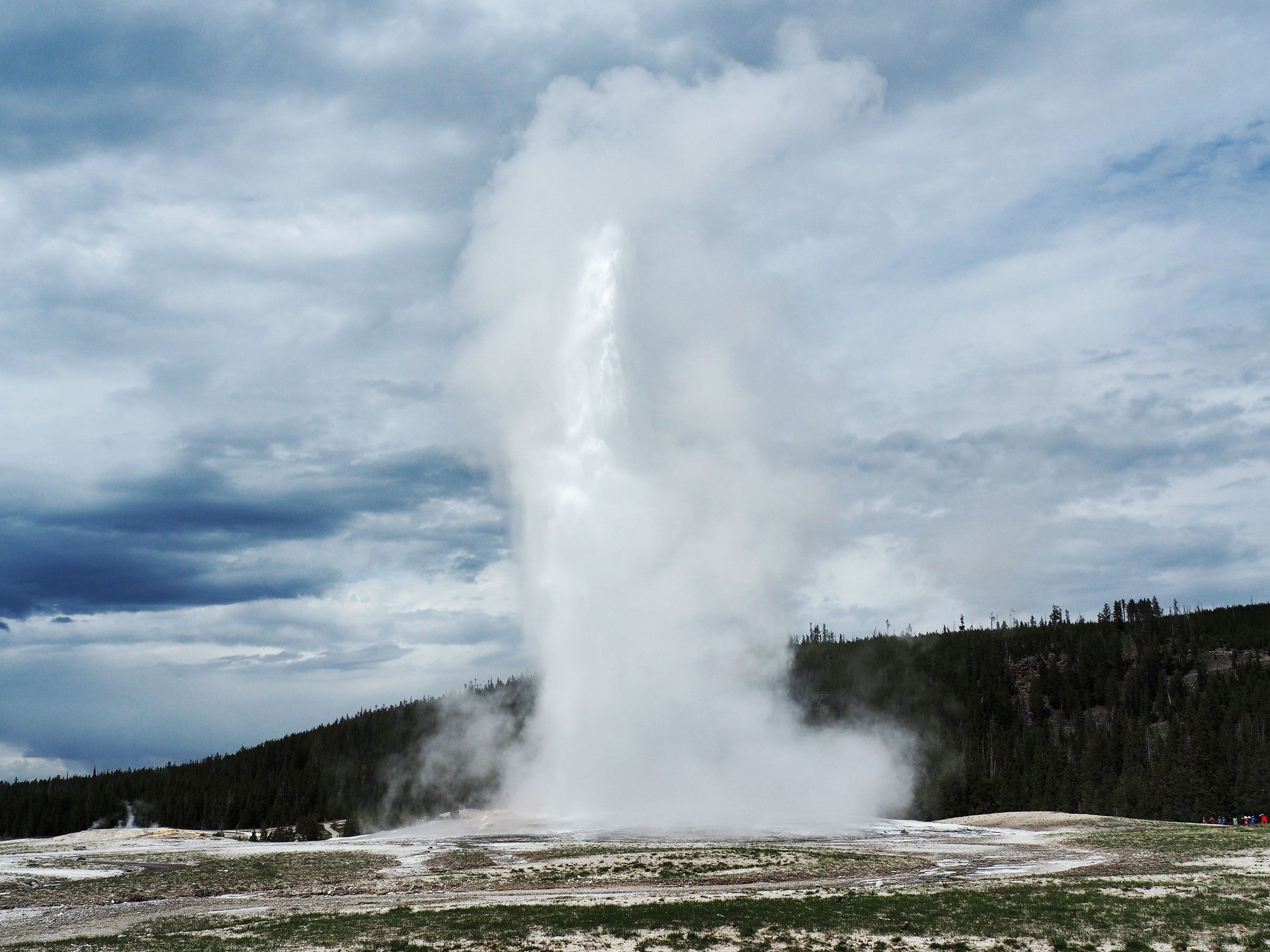 You probably know that Yellowstone National Park’s iconic Old Faithful, which fires geysers up to 180 feet in the air, gets its kick from underlying magma that heats and propels water. You know that because scientists know that: By firing seismic waves into the ground and analyzing what bounces back, and by parsing the chemistry of Old Faithful’s discharge, they can surmise that a magma chamber 3 miles deep is the engine driving Yellowstone’s world-famous attractions. But what exactly all that water under tourists’ feet-the hydrothermal plumbing system, as scientists call it-is doing has so far been a mystery.
“We didn't have any pictures of [the area] between the surface and the magma at all,” says Carol Finn, a research geophysicist at the US Geological Survey. “So although a lot of the geochemistry was known, no one's ever seen a picture of: How does the water flow? Where does it go? Where does it mix?”
Now, thanks to an 80-foot-diameter electromagnetic ring dangling underneath a helicopter, Finn and her colleagues have mapped the plumbing underneath Yellowstone’s boisterous geysers. “This is the biggest survey of any hydrothermal system that's been collected,” says Finn, lead author of a paper describing the work that was published today in the journal Nature.
That airborne loop generated an electromagnetic field, which in turn generated a current in the ground, which was then sensed by the loop. “All these things together can tell us how well electricity is conducted in the ground: It's not conducted well with dry rocks, and it's conducted well with wet rocks or clays,” says Finn.

This allowed the researchers to map the composition of the Earth down to a mile and a half deep, which you can see in the cross section above. (Red means the material is dry, and blue means it’s wet.)
Fresh new volcanic rocks are very magnetic but will transform into clay in the presence of hot water and lose their magnetization. (Those are the blue blobs above, like the one to the left of Old Faithful.) “The reason that's important is that those clays, those blue blobs that we see, are actually markers for upwelling hot water,” says Finn. “They're showing us in a general way where the hot water is coming from.”

In the diagram above, you see a different part of Yellowstone with another blue blob of clay. That upward maroon arrow shows the movement of thermally heated water, while the pink stars are geothermal features on the surface.
“The other thing that we can see is the chemistry of groundwater,” says Finn. (Its movement is represented by the light blue arrows, just below the surface.) Cold water from rain or snowmelt starts without salts or other minerals in it. But when it seeps down through the faults-indicated with brown vertical lines-and gets heated deep in the Earth, it gets injected with all those goodies, which changes its electromagnetic signature. “We could actually tell the difference between the cold water, which is generally at the top of the system, and hot water, which is deeper,” adds Finn.

In the visualization of Yellowstone Lake above, the black arrows show the movement of thermal liquid, and the maroon arrows show thermal fluid moving along the brown fault lines. “What we can see is how some of these faults actually bring water to the surface,” Finn says.
You can think of this complex hydrothermal plumbing as being like a city’s infrastructure, with all the pipes carrying the water across the landscape. And it’s important to understand how it works because there’s a lot of geological activity underneath Yellowstone. “There's not that much concern right now that we're going to see a volcanic eruption from Yellowstone in our lifetimes-it's just not a system that's on that sort of edge,” says Michael Poland, scientist-in-charge at the Yellowstone Volcano Observatory and a geophysicist at the US Geological Survey, who wasn’t involved in the research. “But the thing that a lot of people don't fully appreciate is that hydrothermal explosions-basically steam explosions-are also an important hazard.”
These happen about once a year, when steam builds up underground until the land above pops like a pimple, flinging rock far and wide. Some 13,000 years ago, one of these explosions left a bay on the north side of Yellowstone Lake that’s over a mile wide. “It's the largest such explosion crater on the planet that we know of,” says Poland. “There can be some huge steam explosions in Yellowstone. So understanding more about these hot water circulation patterns is really important for understanding more about that kind of hazard.”
The map is also useful when considering geothermal energy, or using Earth’s natural warmth to generate electricity or heat homes. Extracting such energy is illegal within Yellowstone itself, but if it was tapped nearby in, say, Idaho, that might influence hydrothermal activity in the park. “There are examples all over the world of geysers that have gone silent when geothermal energy has been tapped nearby,” says Poland. “But we don't know how the hydrothermal system [in Idaho] is connected to Yellowstone. So this sort of thing starts to give us some clues as to how the system works, how the system is interconnected.”
The geothermal industry already has a good idea of which active areas to exploit for energy; they use a method similar to the one from this study, only with instruments on the ground that image what’s immediately below them. But for scientists trying to study swaths of geothermically active terrain, a helicopter gives a nice broad view. “It’s given a spectacularly comprehensive view of hydrothermal systems of this very famous volcanic region, and I hope that it motivates further studies in other systems that will probably be just as revealing,” says University of Utah geophysicist Philip Wannamaker, who wasn’t involved in the research. “They’re groundbreaking on that front.”
Understanding how Yellowstone’s subterranean water mixes has also been a critical missing piece in the study of the many microbes that live in the park’s 10,000 hot springs. Each spring has a unique chemistry based on the particular water bubbling into it, which has created some of the most biodiverse ecosystems on Earth. The hot springs are packed with species living not on photosynthesis from the sun above, but the chemical energy from below, similar to how bacteria live off sulfur on deep-sea hydrothermal vents.
Previously, microbiologists could infer the underlying geology of a given hot spring based on the chemistry of its water, but this new research actually maps all that plumbing in unprecedented detail. “The microbes want to come to dinner-they want to come to the table to eat-but who comes to dinner is dependent on what kind of food is being presented to them,” says Montana State University geomicrobiologist Eric Boyd, who wasn’t involved in the research. “And that is all completely dependent on these subsurface fluid-water-rock interactions that are taking place, which [Finn] is able to image and provide perspective on.”
That’s not only important for studying the life that’s currently teeming in Yellowstone, but also for looking back in time for clues about how life emerged on Earth billions of years ago. “If you're interested in asking the question, ‘What would early forms of life be doing?’ well, let's look at contemporary chemosynthetic life in a hot spring in a hydrothermal system like Yellowstone,” says Boyd. “I think Carol [Finn]'s work, which really illustrates how these mixing regimes can actually take place, is really paramount. And it allows us to discover why such biodiversity can exist, be maintained, but also how it might have been generated on Earth.”