The middle-mile delivery challenge isn’t sexy, but autonomous trucks can fix it

The middle-mile delivery challenge isn’t sexy, but autonomous trucks can fix it

When you think of autonomous trucking, most of the airspace is given to the long-haul variety, especially with the driver shortage still underway.
But automation has a vital role to play for services with shorter routes.
I recently met with Gatik, a company successfully deploying middle mile autonomous trucks throughout Northern America and parts of Canada. Gatik delivers goods between micro fulfillment centers, drugstores, smaller warehouses, and other local pickup points. Their biggest clients are Walmart in the US (over 4700 stores) and Loblaws in Canada, with over 2500 stores.
Sign up and get your free EV guide
The beginners’ guide to getting an EV
I spoke to Richard Steiner – Head of Policy and Communications at Gatik – to find out about the legal state of play for autonomous trucks, including the safety aspects, and how other drivers feel when they see a huge vehicle heading their way with no one in the driver’s seat.
The legal status of autonomous trucks 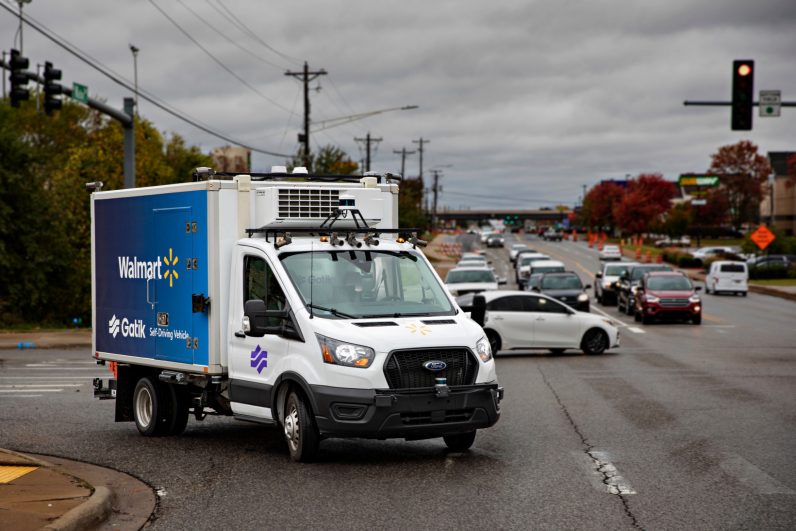 A fully autonomous Gatik truck. Credit: Gatik
The legalities around autonomous vehicles vary from state to state, especially in the case of people carrying, so I wanted to find out what was actually possible for Gatik.
Steiner explained that 24 states in the US permit fully driverless trucks in the paid movement of goods. Also, many states allow for fairly advanced testing – essentially, everything up to actually removing the safety driver.
As a result, Gatik is live in a variety of states, including Louisiana, Arkansas, Texas, and Ontario in Canada. Currently, it can test in California.
How does a company go from L4 to fully autonomous?
There are several levels of vehicle automation. Gatik began its truck automation operations with a human behind the wheel of each vehicle. This is so someone was capable of intervening should there be a need to switch the vehicle from autonomous to manual mode.
There is also a human in the loop at all times to provide remote supervision. Steiner stressed that this is not a teleoperation, noting:
“We do not consider it safe, let alone effective, to operate a vehicle on public streets at relatively high speeds – say up to 45 mph – with what is ultimately a remote control.”
The off-site supervisor is there to assist should the driverless vehicle encounter an unusual or unexpected situation, such as a fallen tree in the middle of the road. The truck can patch into the remote supervisor and request a high-level decision in these moments.
“The remote supervisor would essentially say yes or no to the vehicle regarding whether you may borrow the neighboring lane to go around the tree,” Steiner told us. “The vehicle would then undertake that action at the local level.
Steiner notes that the company also has close relationships with local authorities, so issues like unexpected roadworks are rare. “But edge cases are edge cases for a reason. But, for us, the remote supervisor is an additional layer of safety which can come into play should it be needed.”
What’s the workflow like?
We now know how autonomous trucks stay safe, but how do they operate in practice? Thankfully for you, we found out:

A truck arrives in driverless mode at the dock store
A Walmart associate punches in a unique code onto the outside of the truck, providing access to its cargo bay.
The goods are loaded onto the truck.
The truck is closed.
The truck drives itself to the retail location.
A Walmart associate enters a unique code and takes the goods out upon arrival.
The process repeats.
Pretty tidy!
It’s foreseeable in the future that some businesses will use robotics to automate the loading and unloading process.
As Gatik uses both ICE and electric trucks, charging stations are at both Gatik’s vehicle locations and the customer loading bays. A continuous service model is provided, as trucks can grab a charge during loading or unloading goods.
And that’s how Gatik does what it does successfully.
What’s the secret to Gatik’s success?
Gatik has a 100% safety record. It attributes this to its repetition and fixed repeatable routes.
Steiner told me:
“Our routes are mapped to the nth degree in intensive detail by our team of engineers. The more that you can constrain the challenge of autonomy and simplify what is ultimately an incredibly complex problem, the sooner you can safely and effectively bring a product to market. So that’s what we’ve done.”
He continued, “So we specifically map for the safest route possible. We’ll take three right turns versus one unprotected left because it is safer to do so.”
It also allowed the company to validate its technology – and, vitally, economics.
What are the savings to the companies involved? 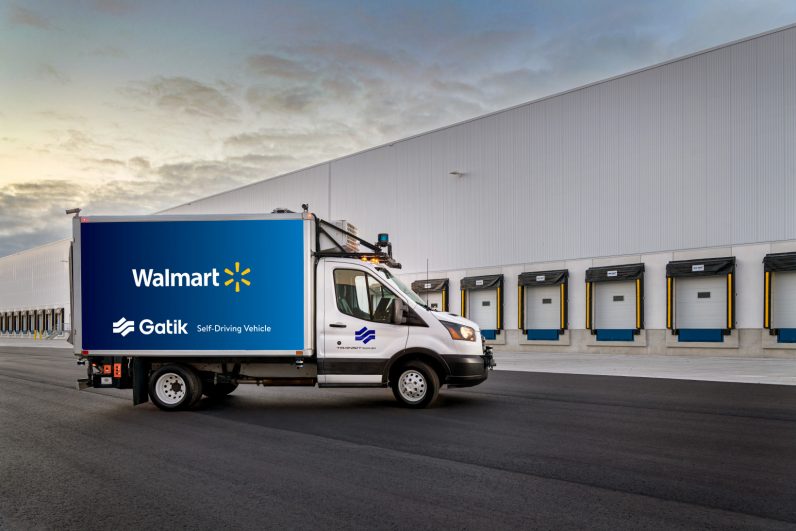 Gatik solves the driver shortage for Walmart. Credit: Gatik.
The shortage of truck drivers worldwide is so great that Walmart announced earlier this month that it’s offering them a salary of up to $110,000 a year.
Even with that sort of money being thrown around for human drivers, the cost of implementing autonomous trucks can be large. That begets a simple question: do autonomous trucks actually save companies money?
Unsurprisingly, Steiner thought so. He explained that driverless operations can save a company at least 30 to 40% in wages. On top of that, because they’re “heavily over-optimizing the routes, fuel, and maintenance costs are built-in.”
He told me that when you scale this sort of driverless model nationally, “the math becomes very effective very quickly.”
But what do other road users think when they see a truck with no driver?
I was curious to know how drivers responded when witnessing an autonomous truck in the wild. Steiner gave the example of Bentonville, Arkansas, where the company has been operating for three years:
We’ve done a huge amount of local stakeholder engagement before we went driverless – from the governor of Arkansas, down to the local mayor of Bentonville and fire, police, emergency services.
He noted that people found it “mind-blowing” for the first five minutes, but then it got “boring very quickly” because the vehicle was acting in a normal, safe way.
The company’s next move is to expand its customer density and markets. But it’s still a challenging space with a lot of work required to meet regulations (or lobby for their evolution) and get all of the necessary stakeholders onside. The task of mapping within the appropriate geocached routes is nothing simple either.
And of course, all of this becomes even more complex as companies attempt to expand to international markets.
The supply chain has been struggling to meet consumer demand, especially for local delivery. Consumers have come to expect easy access to retail goods. This means more trucks and more trips, and more strain on the supply chain.
The supply chain delivery challenge isn’t easy to solve, but companies like Gatik are a vital piece of the autonomous jigsaw.