The Penultimate Episode of Moon Knight Challenges Everything That Came Before

The Penultimate Episode of Moon Knight Challenges Everything That Came Before 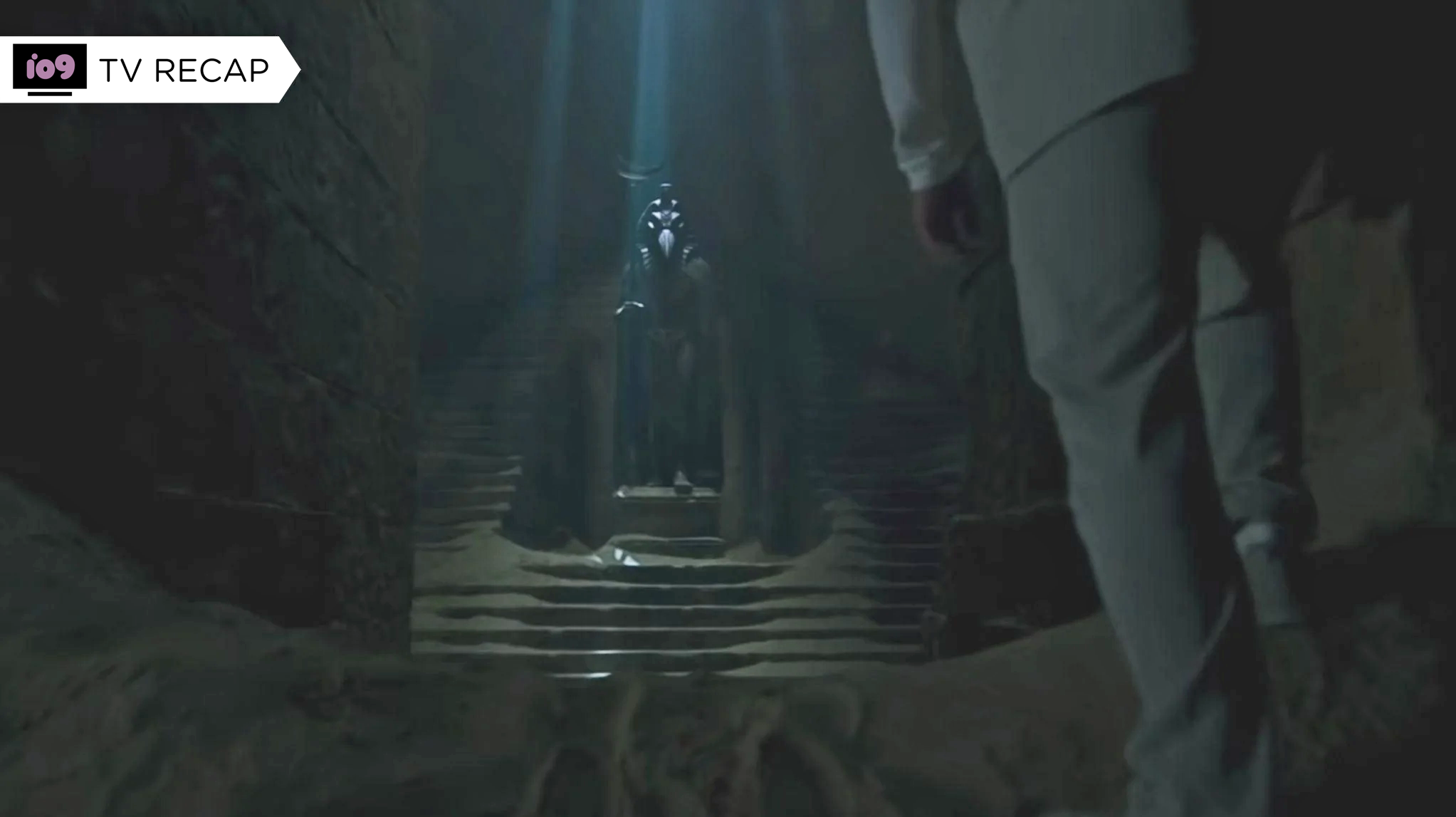 In Episode 5 “Asylum” of Marvel Studios’ Moon Knight Marc (Oscar Isaac) and Steven (Oscar Isaac) face ultimate judgement in a race against time. Or do they?

Both recall being shot at Alexander’s tomb, but the good doctor Harrow (Ethan Hawke) is there to assure them its all just been their imagination. Or has it? The hippo goddess seems to think not. Oh yeah, there’s that from last week’s cliffhanger.

This week’s episode is crucial, but still shrouded in a lot of guesswork as it vacillates between Harrow telling Marc he’s in a psych ward in Chicago and not the reality he’s created of comfort where the aforementioned Hippo-headed deity, Tawaret, guides Stephen and Marc through the Duat, the Egyptian Underworld. She also name drops that its akin to the ancestral plane from Black Panther as an intersectional plane of untethered consciousness. You dig?
Turns out that Marc and Steven are dying-but before they can reach the A’aru, the Egyptian heaven known as the Field of Reeds, they must balance their hearts against the feather of truth. Tawaret asks why they would imagine a mental hospital as their place of judgement, and Marc says it’s because they’re insane. He mentally breaks into the idea that Harrow is probably right, and opts to go back to the ward instead of facing himself and Steven. He tries to open the door to expose the real world but instead it reveals they’re on a boat sailing through you guessed it: the Afterlife.
Apple AirPods 3
Level up your earbud game
Apple has added premium features previously exclusive to its more luxurious AirPods Pro, such as spatial audio and water resistance.
Tawaret takes their hearts to weigh against the feather of truth. Marc’s not wanting any of this, and proposes to Steven that they kill the Tawaret and steal the boat if it comes to it. Their scales aren’t balanced, so they have to help each other discover and cope with what they’re hiding. Marc’s hiding a lot of bodies in his kill list, but as they explore Marc’s psyche what startles Steven even more is when he finds a little boy in the room with them. He pursues him to find out that its their younger brother Randall.

In a flashback to a memory that Marc’s suppressed, Steven explores their childhood. In it Marc and Randall play Tomb Busters, (the movie we saw Harrow showing Marc in the last episode), as they make their way to a cave that gets caught in a flash flood. Only Marc survives, but carries the guilt of his brother’s death, and his mother Wendy is horrified by the loss of one of her sons. She alienates Marc for much of his life, and takes his brother’s death out on him… as well as someone, Steven is about to discover, before Marc pushes him out of the memory.
But it’s not long before they appear in another memory, this time of bodies in desert sands. Marc explains to Steven that he turned to mercenary work after he went AWOL in a fugue state and got discharged from the military. He went work for hire for his old CO, Bushman, and he took a job to raid an Egyptian tomb. Late in the game of the gig, he gets a call that there’s not supposed to be any witnesses and Marc couldn’t live with that. Steven finds the body of Layla’s father, and Marc explains he tried to help them get away but failed and got shot. This is where he crawled into Khonshu’s altar and asked him to be his hand, his warrior. The Moon God gets him to swear to protect the travelers of the night and exact vengeance in his name. Steven tries to get Marc to understand-he’s been manipulated by Khonshu from the beginning too. 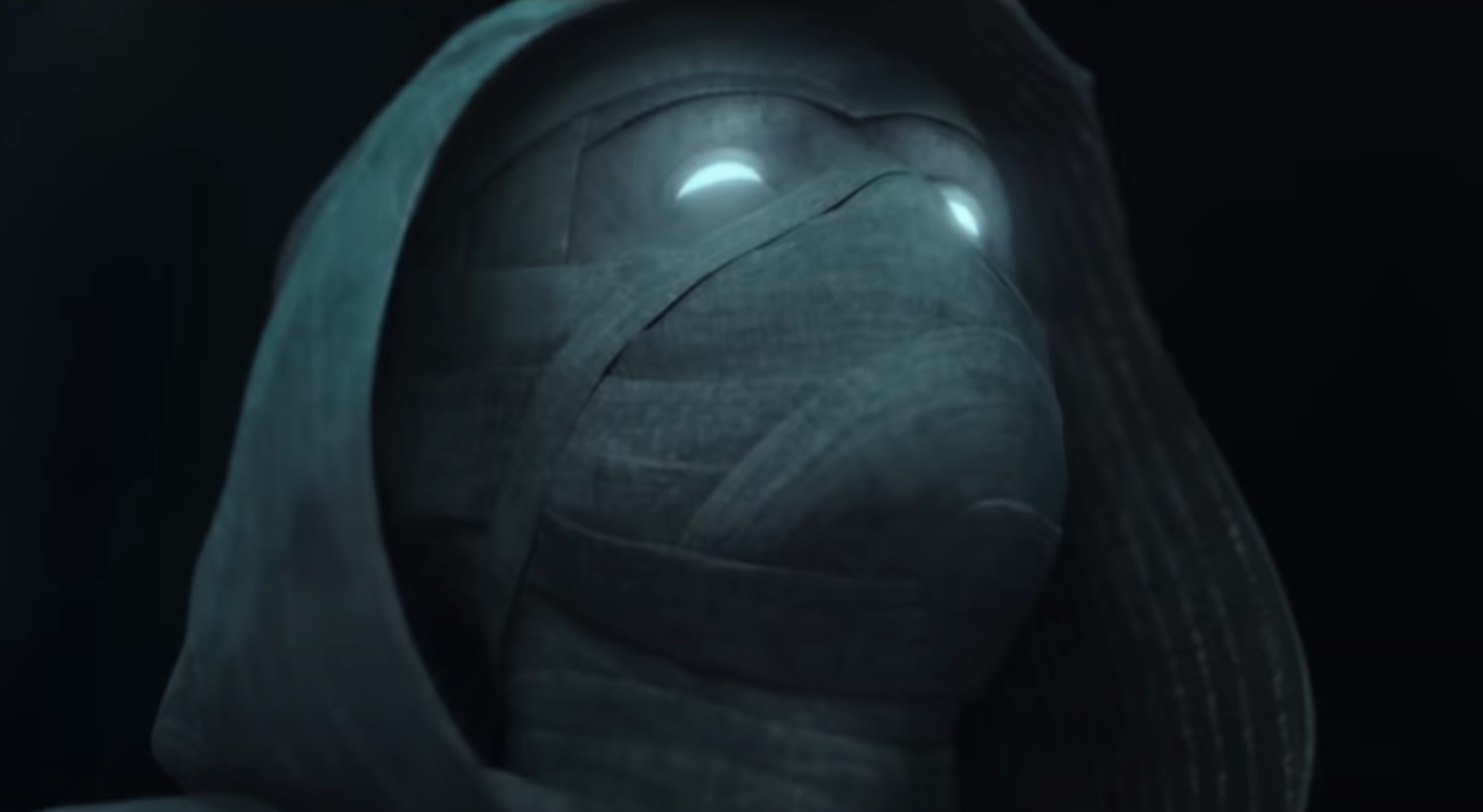 Tawaret interrupts them when she notices souls being judged before their time falling all around them. They explain that Harrow is taking Ammit’s power of pre-judgement a bit too far and that they need to stop him, even if it means bringing Khonshu back-and they need to get to Layla, who’s up there alone in the world of the living probably trying to take him on. Tawaret agrees to take them to the gate of Osiris, but that first they need to balance their hearts on the scales or they’d be lost to the sea of unbalanced souls ready to drag them down and crystalize them before they could reach the Field of Reeds. Steven presses to find out what Marc’s hiding, but Marc reacts so violently that he suddenly finds himself appearing back in the Asylum, at Harrow’s office. It’s unclear if Harrow is really there keeping tabs on Marc to mess with his mind some more, or if he’s meant to be a real doctor. He says it’s good for him to come to terms with what really happened, asking him if he created Steven to hide, or if Steven created him to punish the world.
Back in Marc’s memories, they’re transported to Marc’s mother mourning the death of her son, but there, Steven uncovers a tragic truth about her physical abuse toward Marc: that it’s where he came from. Steven Grant was the hero of Tomb Buster, and Marc’s idolization of the character lead to him manifesting a personality with that name to cope with his mother’s abuse. Marc goes back to the wake in his memory, and confronts his father for not protecting him. He leaves to not relive the trauma and Steven explains to Marc that his brother’s death wasn’t his fault, in a cathartic act of self-care. It’s a great, emotional scene, and Isaac truly delivers a tour de force as a broken man unpacking his PTSD and doing his own emotional labor.
It’s a little too late for the plot, however, as Tawaret reveals the gates of Osiris have never been closer to the human world as before and that their time is up. The unbalanced souls try to lay claim on them. Steven steals the boat in a reckless move and realizes he also needs to embrace the part of him that’s Marc. They embrace, and reach balance but at the cost of Steven accidentally sacrificing himself to the Duat when a soul almost drags Marc down. It’s so sad to see Steven get frozen sorta like Anna in well… Frozen. Marc tries to go back for him-but is suddenly transported into the Field of Reeds. Uh oh. There’s clearly a lot for Moon Knight to wrap up in its final episode, whether it’s saving Steven, Layla, or the world from Harrow’s machinations. But will it be able to do so satisfyingly with just one more chapter?
We’ll find out next week.
Want more io9 news? Check out when to expect the latest Marvel and Star Wars releases, what’s next for the DC Universe on film and TV, and everything you need to know about House of the Dragon and Lord of the Rings: The Rings of Power.